During the course of a year the weather changes with the months and seasons, so the wildlife changes progressively. In the winter many insects and plants appear to die back and disappear like the leaves on the trees. But then here at Gabriel’s we are a natural home for winter visitors like little Egret. A flock of heron-like white birds can be seen in the cattle fields on the approach to the fishery. Long-eared Owls can also sometimes be seen in the ash trees when leaf is off.

The wet weather seems to encourage the Hares to stay in the fields adjacent to the River Eden. Flocks of Field Fare with their orange breast and dark flecks are common visitors.

Green Woodpeckers and Pheasants, Sand Pipers and Snipe can also be seen around the lakes. Flocks of Brambling mixed with Chaffinch are a common sight at this time.

As spring comes forward we see the winter birds migrate. As the blossom on the bushes and trees decorate the landscape with colour, so the spring arrivals of many woodland and marsh birds fill the air with their pleasant sounds and happy chirping. They feed on the tremendous numbers of emerging insects, butterflies, nymphs, beetles and bees and ants. You may be able to hear the cuckoo around Easter time, perhaps a little earlier.

Over the course of the year you will see Primroses in flower. Bluebells when in flower create a beautiful blue tinge to the woodland floor.

Lapwings nest in Hare Field- these black and white birds in flight, have rounded wings which enable them to demonstrate their acrobatic flight and wounded courtship aerial display. On the ground they have a green back and a distinctive crest on their heads. Their call is a clear Pee- Wit.

Great pond snails are common and can be seen in the ditches and feeder streams to the fishery, as can whirligig beetles, which often gyrate on the surface of the water before diving and hiding in shallow water debris.

The common gnat and midge don’t bite people but watch out for the villain that does- the Mosquito, which looks just like the gnat. They also make a meal for the Pipistrelle Bat and the Natterers Bat that fly low over the water and can be seen most evenings over Admiral Lake.

Long tailed Tits, Blue and Great Tits can easily be seen around the lakes. Warblers like the Reed Warbler and Robin can be recognised by their song, which is varied and joyful.

Hidden in the bushes and brambles and more secretly about will be the Wren and Dunnock. Quite a bright yellow bird often seen sitting on the fence posts of the approach road is the Yellow Hammer. Its cousin the Reed Bunting which looks a little like a sparrow with its black throat, is at home around the lakes.
There are so many birds to be seen, too many to mention and some are obvious like the Kingfisher and Swan. 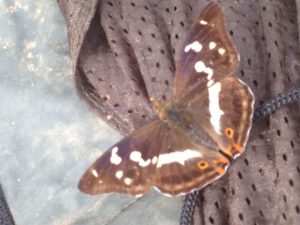 The orange tip butterfly can be seen where we have cuckoo flower growing in the wet land around the lakes. The Cuckoo Flower blossoms between April and June, sometimes July depending on the weather.

Peacock butterfly is often seen along the banks of the River Eden where there are some large areas of nettles. It has a wing span of some 60-70mm with distinctive four blue like edges patterned on its wing tips.

The Comma butterfly has a ragged edge to its wings which are formed in brown with an orange centre and are often seen along the bank of the River Eden.
Probably the most common butterfly seen around the Lakes is the Meadow Brown. It has a wing span of about 40 to 50mm and is often banded in lighter shades of brown and displays a small eye at the tip of each wing. There are many others.

Roe Deer are often seen just before dusk on the edge of the woodland but beware if you are driving a vehicle, as the lights may dazzle them and in their confusion may run into you. So please drive carefully, 15mph on the estate roads, 5mph in the camp sites and fishery.
Foxes, badgers, hares, squirrels, weasels, stoats and mink are all present on the estate.

There are several different species of frogs present although the most often seen is the common frog and the bull frog. During the months of March, April and May, some males croak some squeak while others whistle similar to someone calling a dog.

Some toads enjoy crossing the estate roads between the lakes, so please be considerate when arriving or leaving the car parks.

Newts can be seen in the small shallow ponds around the fishery. These are smooth newts. The breeding males display, in the spring months, their long continuous crests and orange stomach, and frequently the whole of their body is covered in back spots. Smooth newts grow up to 90mm long. The females and non-breeding males are, in the breeding season a pale brown with a darker bar along their back. Non-breeders have been found roaming far from the water in a variety of different moist habitats. Between mid-Octobers to February they hibernate.

Grass snakes are very shy and like to swim across the lakes and enjoy sunning themselves on the islands away from the traffic of pedestrians and vehicles. These often misunderstood creatures are very pretty and should be admired for displaying many different markings and colours on their bodies. Please note, if you are lucky enough to view one close to you then be assured that the grass snake will most likely want to get away to the safety of the bushes.

There is a tremendous range of sizes and colours of these delicate creatures. The difference between these two is the wings. Damsel’s fold their wings back when they rest and are smaller while dragonflies rest with their wings outstretched. Both spend their early life in the water and feed on other small animals.

Every Friday, in Bridge End field from 5pm for Campsite and Fishery guests, we’ll have a food van serving the following:

Come along, get out in the fresh air and enjoy some delicious food.

Both cash and card payments accepted.
Individuals will be responsible for their own PPE.

Please stay well and safe during this uncertain time.